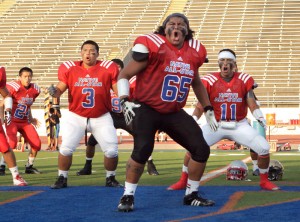 The national all-star football game in Arlington that few have heard of is six days away. All but two of the 45 young men who signed up to play are from out of state. Preparations have been frenetic inside the game’s headquarters, a metal West Dallas industrial building that doubles as a commercial construction company.

The man in the dusty overalls, half-shouting above the crackle of welding torches, is 49-year-old Steve Cardwell, owner of the construction company and chairman/benefactor of the nonprofit organization that funds the all-star game.

Juggling both jobs isn’t easy, Cardwell admits, but to him the football game is far more than that. It’s his contribution to his beleaguered, dying race. The Native American race. All of the players, coaches and referees participating in Saturday night’s Native All-Star Classic at UT-Arlington’s Maverick Stadium are of American Indian descent. The players are all recent high school graduates, which means they already have triumphed, win or lose Saturday.

“These kids are not at-risk,” Cardwell said. “They are risk.
​
Read the whole article here…