THE 2012 NATIVE ALL STARS CLASSIC 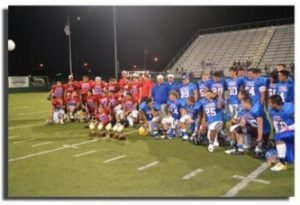 The 11th annual game was held this year Tahlequah, OK at Northeastern State University. It started out with the combine on Monday morning. The combine was more demanding this year due to the fact that we had more assistant coaches then we have ever had. There were 7 coaches on each team. The coaches really paid attention to the skills of each athlete. This made for an exciting draft as well as the combine and the entire camp.
We had 37 players this year and 9 no shows. This was a large number of no shows but the kids have never minded playing IRON MAN football. NAS Football is like no other All-star game in the country.  They come to hit and play hard to showcase their skills against other native kids who are very good players. They rotated in and out and the coaches did a good job of keeping them hydrated and rested between the 2 a day practices. The kids consumed large amounts of pickle juice as well.
The 2012 class trained as hard as any of the previous camps to put on a very good hard hitting game.
Two veteran NFL players, Jimmy Warne and Ron Baker, coached the Red hawks. They also had Gary Tanner and his brother Jacob Tanner along with local guy Coach Sapulpa and Dylan Parker. The Blue Eagles were all mostly Haskell alumni.
Second year head coach Cody “Iron Eyes” Wilson and along Bryan Raymond, Micah “Jaguar Paw” Swimmer, Kelvin “cheese” Starks, and Andre “Moose” Roberts (former MMA star).
The kids enjoyed a canoe race on the Illinois River. Red players started strong, but the blue team made a strong run at the end and had more players finish ahead of the Red hawks.  They certainly enjoyed cooling off in the river and a break from the practices.
On the fourth of July it seemed that fireworks were aplenty as the town of Tahlequah allows them within the city limits. They were treated to movie night and most of the players enjoyed seeing Ted. Some watched Spiderman and Abraham Lincoln vampire killer.
The highlight of the camp, other then the game was the basketball game between the coaches and their trainers and water girls. The Red Team called themselves the Geriatrics and the Blue squad was the Young Bux. The rules were altered slightly to accommodate the “older” team. It was called slow break basketball. It was very entertaining and the crowd had a wonderful time cheering as both teams were launching a barrage of three pointers. The game ended in a tie!! 29 to 29…
The crowd was treated to some mighty fine BBQ from Kenyatta Wright afterwards. The kids were then given out their jerseys and treated to some great speaking from directors of the camp from Native Revision.
It was a wonderful pep rally and it was enjoyed by young and old.
The Game was live streamed via the Internet by ihigh.com and it was a milestone for the NASC game. The crowd was very enthusiastic and supportive. The game was close all the way to the end with two very stout defenses refusing to budge. There were plenty of super hard hits, with each team trying to impose their will. In the end, the Blue eagle defense proved to be too strong at the end. There was some outstanding play at linebacker for the Blue Eagles.
The MVP awards were given to out immediately after the game. The game MVP was a Jake Phillips.
The first ever Alex Battiest leadership award was given to Ryan Begay from Crownpoint, NM. The award is given to the athlete who best represents what Alex did in his young life. He was an exceptional student and leader at his high school in Broken Bow, OK.  Alex was a very good player at the NAS game in 2011. He battled cancer for four months after the NAS game and passed away in January of this year.
Ryan Begay was selected out of eleven applicants by Alex`s parents. It was very touching to see Alex`s mother give Ryan a big hug as both parents presented the award. Ryan’s lists of achievements are long and exceptional. He is a true warrior on the field and in the classroom.
We were honored to have eleven honors roll students play in the NASC game this year!
A mighty big HAHO to our sponsors:

A big Special thanks to Northeastern State University,  Karen Ross, her staff and the local volunteers that helped us put this game on. They made us feel very welcome and did a marvelous job of keeping up with us!
To the over 450 fans that showed up and supported the kids!!!