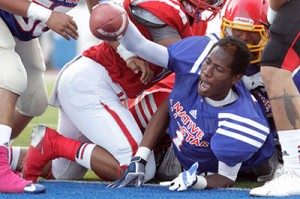 The 2013 Adidas Native All-Star Football Classic was played on July 6th at University of Texas Arlington Maverick Stadium in Arlington Texas. Pre-game ceremonies included awarding of the Alex Battiest leadership trophy given to the athlete who best represented the late player from the 2011 game who passed away in 2012. The family from a list of all the honor roll students at the camp chooses the recipient of this award. The eligible number totaled 15 athletes. This year`s winner was Matt Kellestowa. Matt is a member of the Zuni Pueblo located in Zuni, New Mexico. Congratulations to Matt! An honor song was sung by the Bearclaw drum of Dallas, TX. A beautiful rendition of the national anthem was sung by Jula Harjo a member of the Creek Nation.

Former Principal Chief of the Cherokee Nation and author Chad Smith was the honored guest and did the coin toss to kick the game off. And was on hand to hand out the MVP trophies after the game ended. We were honored to have Mr. Smith at this year’s game. The Blue Eagles coached by Cody “Iron Eyes” Wilson won the game 31 to 20. First year coach John Harjo coached the Red Hawks. The game started out like any other NASFC with a very hard hit on Red Hawks #23 Guthrie Dean, running back from Morris, Ok, on the first play of the game. That hit would set the tone for a dominating first half as the Blue Eagles forced 6 turn overs in the first half with crushing hits and some stout defense.

The Blue Eagles defense was led by defensive MVP award winner Kervin Tom a Navajo from Monument Valley High School in AZ. Running back Jennara Bolin a Mississippi Choctaw from Central was quick on his feet and scored two rushing touchdowns as well as ripping off some long runs. Bolin also threw a touchdown pass to Kervin Tom. Jennara played quarterback on several plays and was awarded the game MVP. He was very humble in accepting his award. The combination of Jennara`s speed and pure athletic ability along with the fearless routes ran across the middle by receiver and Offensive MVP for the Blue Eagles Jared Yellowhair, another Navajo from Pinon High School, made for very exciting football.

The great Navajo Nation was well represented at this year’s NASFC with 13 players. They proved to be great warriors in this year’s game. The game was “loaded” with big plays both offensively and defensively.

The Red Hawks were stunned from the onset. While they were the bigger team it seemed they were blindsided by the tenacious defense of the Blue Eagles. It took them until the 3rd quarter to get their footing and the comeback was on! The crowd was really going wild, as the Red Hawks seemed to finally awaken and were able to get their offensive game going. They piled up close to 300 yards of offense in the second half and used their power to close the gap behind the strong running of Guthrie Dean and some crushing hits of their own on defense.

The crowd was really into the game as the Red Hawks closed the gap to 24 to 14 in the 4th quarter. They seemed to have all the momentum and looked like they were going to get the game to within a field goal really quick. Mason Leffel, an Oklahoma Choctaw, was airing it out and hooking up with Tasi Malala another Navajo from Monument Valley on some huge bombs. Guthrie Dean settled down from those huge hits early in the game and turned on the jets. He ripped off some huge runs in the 4th quarter.

Mason Leffel was playing both ways and was awarded the defensive MVP. Guthrie Dean, Creek from Morris, Ok was awarded the offensive MVP for the Red Hawks. However, another turnover by the Red Hawks on an interception on their own 30-yard line looked like it was going to doom them. A seam pass to Rain Brady from Chinle, AZ a few plays later seemed to be the back breaker. Guthrie Dean took it 50 yards for a touchdown to make the final score 31 to 20. Outstanding play in the trenches was evident in the game.

A great compliment is being sent out to the big man from Seminole High School in Oklahoma, Zach Walker a Seminole/Creek who anchored the trenches for the Red Hawks. Zach was a low-key player and always had a smile on his face. He played like a warrior possessed throughout the entire game. Most of the athletes are overly eager when the game starts. There are many kids who know this is their last time to ever “lace ’em up”. Those kids say this is their Superbowl. The level of play at the NASFC is somewhere between high School and college level. They leave it all out there on the field for the entire game.

With so many tribes being represented play is extremely competitive. Casey Nichols, a local Texas player from Red Oak a tribal member from the Three Affiliated Tribes, said this was the best football game by far that he has ever played in. He should know, Casey was honorable mention all-district player in 4-A in North Texas. He has seen some serious football in the State of Texas.

The Native All Star Football Classic is open only to graduated seniors from the current calendar year. These incoming freshmen are committed to play at other small colleges or to Haskell Indian Nations University. All the kids are hard working in the classroom as well. They have graduated and this is their reward. The friendships they make here at the camp will last a lifetime. The trash talking is friendly and usually doesn’t get out of hand. They keep in touch using Facebook afterward and are all winners for making it to the game.

The trophies are on display and the stare downs and posturing goes on all week between the two teams once they are drafted. The stories of past games are talked about to the kids and they want to be the next ones immortalized into the lore of the NASFC. They are told of the others before them and how they represented their tribes, school and families. The NASFC is a grueling week of 2 a day workouts and an extra class in the evening of whiteboard work.

This year Steve Cardwell, the founder and chairman of Native ReVision, gave the athletes mentoring classes this year. He started producing the game in 2011 with his Non-profit and says funding comes mostly from his company Brenco Industrial Services. While there were not any tribes that sponsored this year, Steve believes that the local community in Dallas /Ft Worth will come out next year and support the kids just as another non-native company like Adidas did.

“You have to see our event to even have a clue as to our deep impact it has on these kids at the crossroads of life. We are so much more then a camp and an All –Star game”. Cardwell said.

This year Steve`s company furnished a float with a giant eagle head on the front and the players rode on the float with a drum group Thursday morning in the 4th of July parade with the Bear claw drummers and singers pounding out some beautiful songs while in front of the approximately 40,000 spectators at the Arlington 4th of July parade in Arlington, TX. The float won the spirit award, a huge honor since it was the first time Native Americans have entered a float in this parade. It is the largest 4th of July parade in the state of Texas. It was as much fun for the adults as it was for the kids. The athletes were given a very light workout on Friday and rest on Saturday. Athletes toured Cowboys stadium the morning before the game with the Lacrosse girls’ teams and a few parents who made it down early for the game. The entire camp attended the Texas Rangers vs Seattle Mariners game Wednesday night as well.